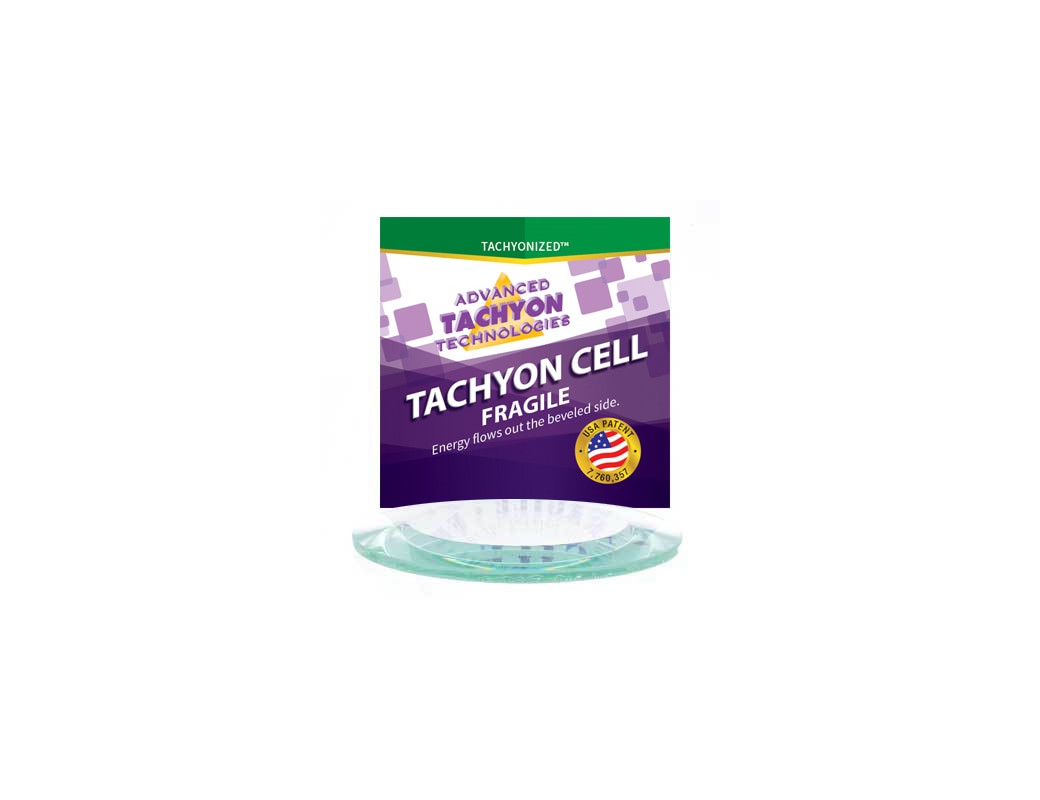 The Tachyonized 75mm Energy Cell is a clear RO style cell with the energy flowing out the beveled (rounded) side.

ACTION: Using Tachyonized tools to charge water actually increases the SOEFs to their highest potential, making the water the best it can be. This difference is clearly illustrated with the bioenergetic potential measurements for each of the waters. These measurements represent a substance’s ability to attract energy. Independent research conducted at PSI Research Laboratories in Middletown, California, shows that the bioenergetic potential of Tachyonized Water was consistently measured at 1,558,000%. This is compared to the 222% potential measured for the Evian Water that was used as a control. From this comparison you can see how very potent Tachyonized Water is! Tachyon charged water, on the other hand, usually reaches a bioenergetic potential of 15,000-20,000%, which begins to slowly dissipate as soon as the Tachyonized Energy Cell is removed. The maximum potential of charged water depends upon the quality of the source water. While the difference between Tachyonized™ Water and charged water is monumental, both are valuable in creating a healthful lifestyle.

Charging Water - You ingest more energy every time you have a glass of tachyon charged drinking water. Unlike Tachyonized Water, you may drink as much charged water as you wish. Please note that Tachyonized Water is not to be consumed by the glassful. It is suggested that you start out taking no more than 5 to 15 drops of Tachyonized Water two to three times a day. It is important to note the difference between charged water and Tachyonized Water. Tachyonized Water has been restructured at the submolecular level through the 14 day Tachyonization™ process. This creates a permanent antenna which, even after it is ingested and absorbed by the body, continues to attract tachyon. The beginning dosage for Tachyonized Water is 5 to 15 drops two to three times per day, while charged water can be taken by the glassful, just as you would drink regular water. Because Tachyon charged water offers a far greater potential than that of regular water it truly feeds your body. We feel it is the ultimate drinking water. To raise the energy of a gallon of water to its maximum potential takes about eight hours with the Tachyonized 75mm Energy Cell. If you have a wide mouth gallon jar, place the 75mm Cell on the bottom of the jar with the beveled side up, fill with water, and approximately eight hours later the gallon of water will be fully charged. Leave the Tachyonized 75mm Energy Cell in the jar, refill before going to bed, and in the morning the water will be fully charged and ready to drink. The 75mm Cell can also be taped to the outside of the jar, as it does not have to touch the water. Be sure that the beveled side faces toward the water. You can also use a Tachyonized Silica Disk or the Water Charger with the Tachyonized 75mm Energy Cell to charge your drinking water.

CONTRAINDICATIONS AND CAUTIONS: None